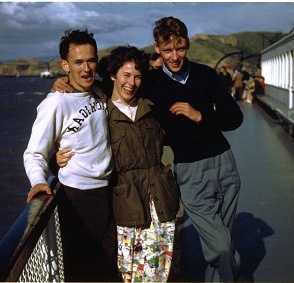 Barbara Helm, who was loved by all, died of pneumonia on March 31. She was 92. Barbara is survived by her four children, Chris, Leslie, Julie and Andrea, all of whom were by her side when she passed away. Barbara had been suffering from Alzheimer’s for more than a decade. Although the process was difficult for her—she once talked of how difficult it had been “crossing the border into Alzheimers” but throughout her ordeal, as she had been in life,  she was always kind and gracious to all around her.

I like to imagine her the way my grandfather once did in a fable as an immortal golden bird who enjoyed soaring through the sky enjoying the beauty of the universe but asked to be transformed into a human being to experience the  joys and sorrows of being human.

Mother, who lived to 92, had four children–Chris, Julie, Andrea and me–and 14 grandchildren and step-grandchildren. She married twice: first to my father, Donald Julius Helm, then later in life, to Torsten Blomberg, a sweet and generous Swede. Although she never had a career, she opened her house to relatives and strangers alike and developed hundreds of friendships over her life. She loved getting to know people, and once told me her favorite hobby was “collecting people.”

In every community in which she lived–and she lived in many throughout the world–Mom quickly became its beating heart. In Yokohama she organized massive fairs to help raise money for the Yokohama International School, and put on woodblock print exhibits to help Japanese artists get exposure to foreigners while at the same time educating foreigners in that rapidly evolving art form. In Oakland, she was in charge of “English in Action” a program that recruited armies of volunteers to help visiting students and scholars in Berkeley learn English in one-on-one conversations.

Mother was born in Karuizawa, Japan on August 28, 1924. Her father, Robert Schinzinger, had come to Japan the year before with her mother Annelise (born Hebting) to teach German language and literature. Robert had received a doctorate in philosophy but was unable to find a job teaching in the depressed economy that followed Germany’s defeat at the end of World War I. Mom recalls being home schooled in Japan with her brother Roland. The two siblings created a phantom classmate to make life more interesting. When her father hired Angela, a nanny, to help with the lessons, Mom would point to the empty seat beside her and tell Angela “Don’t forget to ask her questions too.”

Mom later attended the Canadian Academy in Kobe, and, when the family moved to Tokyo so Opa could teach at Tokyo University and Gakushuin, Mom attended the German school in Yokohama. Like most Germans in Japan, she grew up speaking four languages. Japanese to get along in daily life, English because it was the common language among foreigners, German because it was what she spoke at home and French because that was the foreign language she studied at school.

Mom adored her parent. But I sometimes get the sense there was a hard,  elitist  edge to her mother. In her diary, Mom talks about how, never having lived in Germany, she found herself enjoying a novel that described the life of a young girl in Germany. Her mother asked her why she was reading such “trash.” Then she praised mother for her German translation of a poem by Shelley.

Mom never got over the death of her mother at 49. Annelise had been weakened from malnutrition, and died soon after the end of World War II because she couldn’t get penicillin. She remembers being so discombobulated that when friends knocked on their front door to offer their condolences, instead of opening the door, Mom knocked back. In his fable, Opa describes Annelise’s death as Mom’s first great sorrow.

Mom had suffered many other sorrows. Her first home in Kobe had been swept away by a flood that also killed her first dog. Her house in Tokyo was destroyed by firebombs at a time when the family had evacuated to the resort town of Karuizawa. When Mom took a trip to look at the house, she saw her cat wandering amid the burnt timbers.

After the war, Mom worked for the U.S. Occupation translating German documents into English so they could be used to prosecute Japanese officials in the Tokyo war crimes trials. She also taught English and co-founded the “Inubashi” a group of Germans, Americans and Japanese who, in the aftermath of World War II, traveled around Japan and developed close friendships.

Mom’s first love, an American soldier named Rocky, promised to marry her but broke off the engagement when his parents objected to Mom being German. Mom traveled to California to attend the University of California, Berkeley. With no money, she worked selling magazine subscriptions, doing housework and any other work she could find while she studied political science and library science. It was in California that she met my father, who was also born in Japan. After school the two married and moved back to Japan.

Soon after Andrea, her fourth child, was born Mother got breast cancer.   In Opa’s fable, Dr. Death comes calling at Mother’s door and Mom says she is not yet ready to go because she has work to do raising her children. Instead, she offers Dr. Death a part of herself, her breasts. Opa is referring to Mom’s double mastectomy.

My parents’ marriage was a stormy one that ended in divorce. Opa’s fable speaks of how so many men loved to hear Mom sing and would try to cage her so she would sing only to them. Mom later married Torsten Blomberg, a wonderful Swede who became the love of her life and a constant travel companion.

Some of my life’s happiest memories are sitting on the floor and leaning back against my mother as she wrapped her arms around me and read to me every night from favorites such as Dr. Doolittle, The Wind in the Willow and Peter Rabbit.

Mom studied calligraphy and produced beautiful sumi paintings. She was also a great potter. I’m convinced she would have been a great artist if only she could have stuck to any one thing. She tended to be a wanderer, and in that respect I find myself like her, unable to focus on any one thing. Perhaps that is why journalism suits me. Every day is a new beginning.

When I finished Yokohama Yankee, and a photographer came to our house with the book designer, Josh Powell, Josh was so pleased to see my mother in the flesh after having spent so much time going through her photo albums. My mother loved the attention. When the photographer asked me to pose for my book photo, mother laughed at me. “So what, you’re a star now?” Josh found that funny. Mom always knew how to needle me.

With my Mom’s passing, there is a hole in my heart I fear will never heal. At an earlier difficult time, when my parents divorced, my grandfather wrote the fable about “The Golden Bird” who wanted to come down from the sky and become human even if it meant experiencing sorrow. At the time Opa’s fable helped me to endure the pain of watching my family torn apart by weaving Mom’s sad story into a soothing fairy tale in which sorrow is just a part of the endless cycle of human life. Now, once again, I find comfort in that tale. Here’s how it ends:

“One child after the other she brought to College, and then she was an old lady with white hair. Her father had long since passed away. One morning she felt very lonesome. She looked out of the window and saw a little bird flying through the blue sky over the green woods and fields. And when she heard the bird singing, she thought “How strange! I must have heard this song long, long ago, perhaps even before my birth.” She tried to sing the melody, and her heart became very light. At that moment she heard a knock at the door. At once she knew who it was. “Come in!” She said. “I am ready.” And when Dr. Death entered the room, he saw Birdy’s body lying on the floor, and a little golden bird flying out of the window.