Reviews of Yokohama Yankee in Nikkei and Kyodo Touch On History and Mixed Race Identity.

It’s been an interesting experience watching how books are released in Japan. Yokohama Yankee was officially published at the end of September, but aside from one historian from Ferris School in Yokohama, who was asked to write a blurb for the “obi” the sash around the book, nobody else was given an early look at the book. A couple weeks later, the publisher, Akashi Shoten, posted ads ad in several newspapers including the Asahi Shimbun. Although the ad was small and was tucked under an ad for a book about soldiers and sex in postwar France, since those newspapers are so widely circulated, with millions of readers, i assume some people must have seen it.

Then in November, a month and a half after the book was released and just when I had given up, I finally started getting some significant reviews. I got reviews of Yokohama Yankee in Nikkei Shimbun, Japan’s Wall Street Journal, and Kyodo News Service, Japan’s Associated Press. You can read the Nikkei Shimbun review here. I was pleased to see an economic newspaper touch  in the review not just history, but also issues such as identity that are so central to the book.

The Kyodo News Service piece was picked up by a number of newspapers including those in Okinawa, Kyoto and Sanyou. You can read the Sanyou Shimbun’s version here. The Kyodo 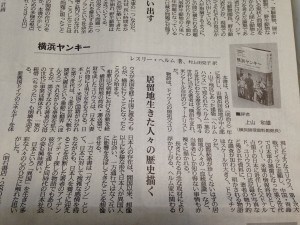 News Service piece was written by Kazuo Ueyama, Director of the  Yokohama Archives of History, and was both detailed and effective in outlining the primary thrust of the book. Below is a photograph my editor in Kyoto sent me of the piece in the Kyoto paper.

My translator also updated her Japanese video about the book, here  but I suspect the link might not work because she may have used classical music in the video that was copyrighted.